Loving Johannesburg is our business and we pride ourselves on knowing what’s good for business. Our backpackers accommodate at 2B Happy because we are in the prime location for those looking to explore and we also know how to enjoy the Johannesburg experience. We have compiled a bucket list of things to do and places to go in Johannesburg, our list includes everything backpackers should try out and tick off during your stay with us.

Johannesburg is a beautiful place whether you are hiking up one of the numerous beautiful mountains or visiting the Shepstone garden or even just in the everyday hustle and bustle of the city. These are just a few of the things that can be done in and around Johannesburg. The amount of things and places available to tourists are literally countless and cannot be covered in just one visit. The best part of it all is that we are a stone’s throw away from the heart of it all.

So if you’re looking to explore Jo’burg properly and need accommodation with a fantastic location the look no further than 2B Happy. 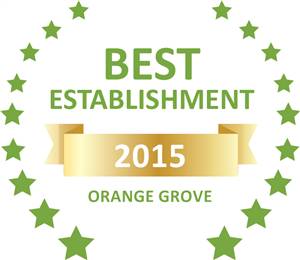 Sleeping-OUT's Guest Satisfaction Award.
Based on reviews of establishments, 2B Happy Accommodation has been voted Best Establishment in Orange Grove for 2015.